Way to drive through those flashing reds

Earlier in the summer I was doing some surfing for information on the old Canadian Northern Railway.  This was mainly inspired by the recent conversion of the CNoR locomotive works building in Leaside into a Longos grocery store.  It's a pretty cool looking building if you haven't seen it yet, both inside and out.  It's hard to imagine that this century old structure was used to service railway engines of the day.  Despite the loss of CNoR and it's ultimate encapsulation into today's Canadian National Railway, the building survived under a few different industries until sitting idle behind a group of buildings along Laird Avenue.  Most people (me included) never laid eyes on the structure until some businesses along Laird were removed, exposing the building's facade to passing traffic.

Along the way I found this site with images from the Global TV helicopter  showing a series of overhead views of the east Toronto area and a few key images of East York.  I was guided to the site by a hit on one of the comments regarding the second image showing Taylor Creek.  Taylor Creek is my bread and butter for running since it's literally steps away from my house.  I run the higher south side trail frequently, known to a few as the Taylor Creek harrier circuit, since it's soft and fairly flat for the most part albeit a bit swampy in places.

This image on the site shows Taylor Creek (the image is captioned Looking northwest up Glen Stuart Ravine on the page) along the section east of the baseball diamonds in Stan Wadlow park.  If you look along the left side of the valley you will see a long straight line leading up to the diamonds.  From there it veers a bit left and continues on towards the lower Don Valley at Don Mills Road.  This was part of the CNoR Toronto-Ottawa railline.  I've often thought this had to have been a railline at some point given the sheer straightness of this mainly level trail.

Hard to pass up an opportunity to explore a railline that once passed only a few hundred meters away from my house.  With that, it was doing some searching of maps, aerial images and whatever I could find, wait for the leaves to fall away, then go on a hunt.

It starts with a whopping 3 minute jog down hill to the base of Haldon Avenue.  Standing on Haldon in line, the ROW would be roughly where the hydro lines are. 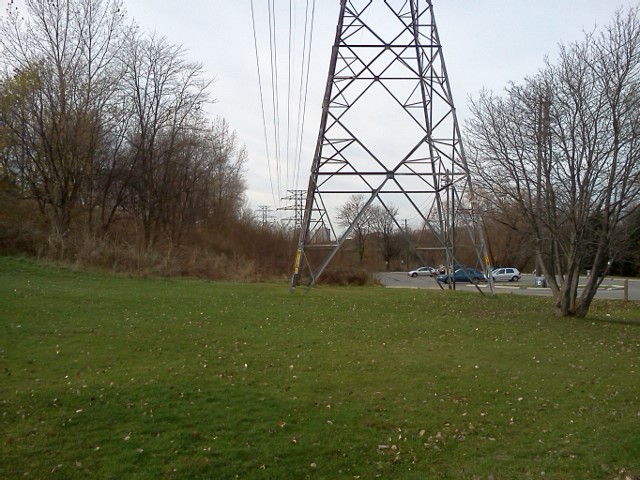 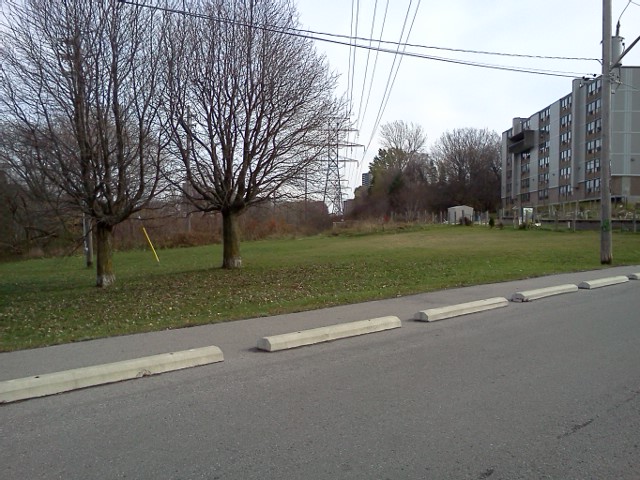 Following the line of the eastbound trail the rails would have passed through where the roadway ends and the parking lot begins.  Hydro One towers run the full length of the trail in both directions.

Utility poles just north of the pathway on the east section may be the current incarnations of those used by the CNoR at the time, being reused and replaced over the years.  Previously the poles used to terminate at a hydro substation just beyond the parking lot. 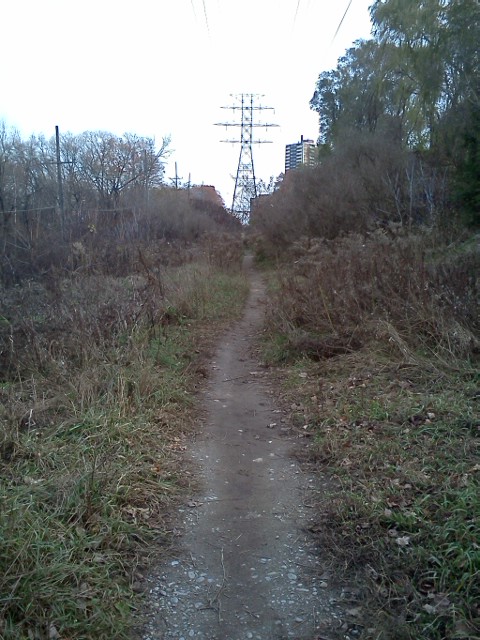 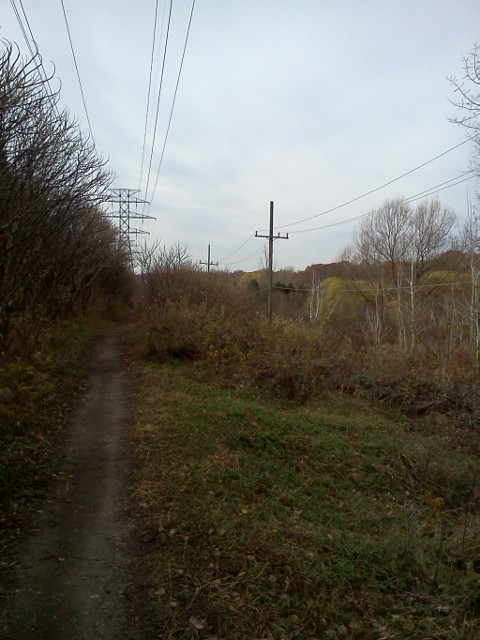 Further east is much the same until you reach a hydro station past Main Avenue.  From Google aerial maps you can see the line stretching through the valley and detect the segment between Dawes Road and Victoria Park Avenue just south of Massey Square and continue on to what is now the TTC line out of Vic Park station.

Returning back to Haldon Avenue, growth makes the immediate west part inaccessible for a bit 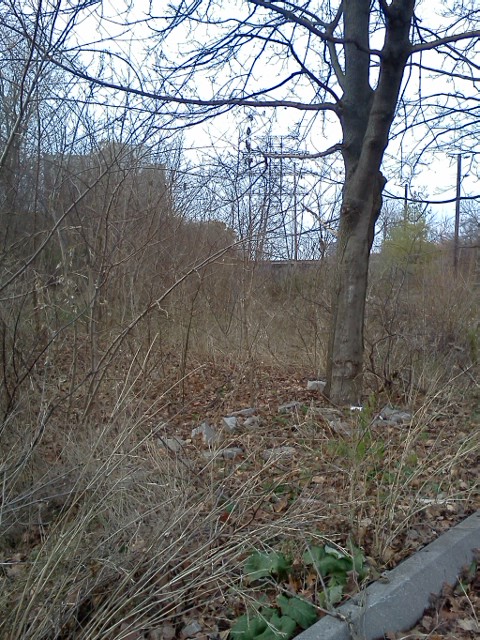 and today it's a slightly muddy climb under the O'Connor bridge to connect back to the ROW area. 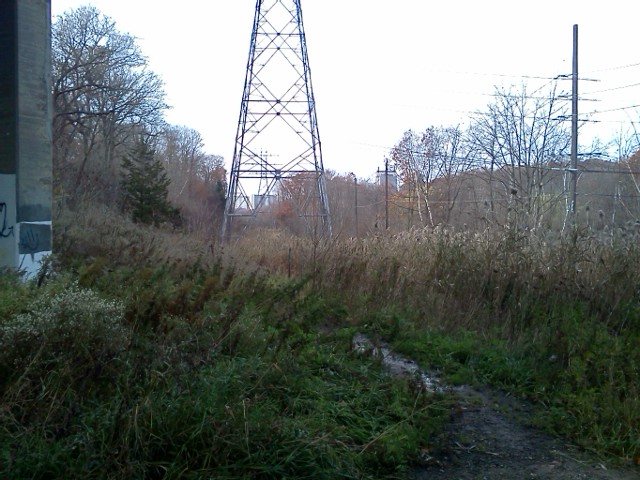 The trail runs high on the north side of the ROW and you can see where the railbed would have existed lower on the south side. 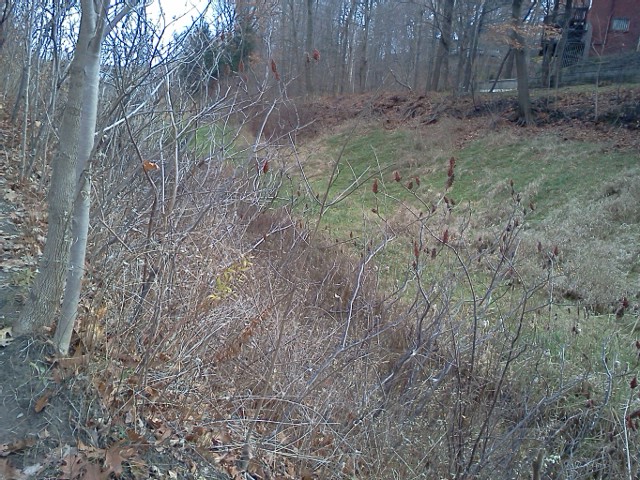 It's pretty swampy down there and must have presented some challenges in keeping the railbed dry and intact.  As you progress westward you descend a sharp hill and soon are back onto the old ROW.
It also gets pretty swampy on some of the higher parts of the old right-of-way. 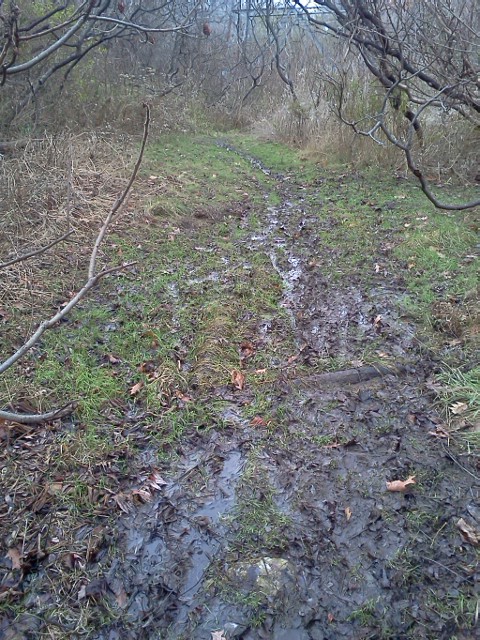 At the northwest end of the trail, the ROW would have crossed part of what is now a parking lot and extended into the web of on and off ramps around the DVP and Don Mills Road.  Anything that existed along there is long gone with major regrading and reworking for the DVP.
Next is looking up archival aerial views on the City of Toronto  Archives site.  These particular images are from 1942, well after the rails were pulled up but the right-of-way can be easily seen.  You will need an SID reader for the files downloaded from the archive site.  Compare it to either Google maps or Bing maps, you can see that Don Mills Road was the same as it is now along with the sections of O'Connor Drive that form it's southern terminus.  Also pretty well intact is the Bala sub ROW.  The river itself has been rerouted to accomodate the DVP in some sections although you can see that the short curved section of the river that approaches the CN lines is still the same in the area where the CNoR line would have connected up.

From this aerial image, you can see the ROW extending from the Bala line to the river and what looks like supports for the bridge structure: 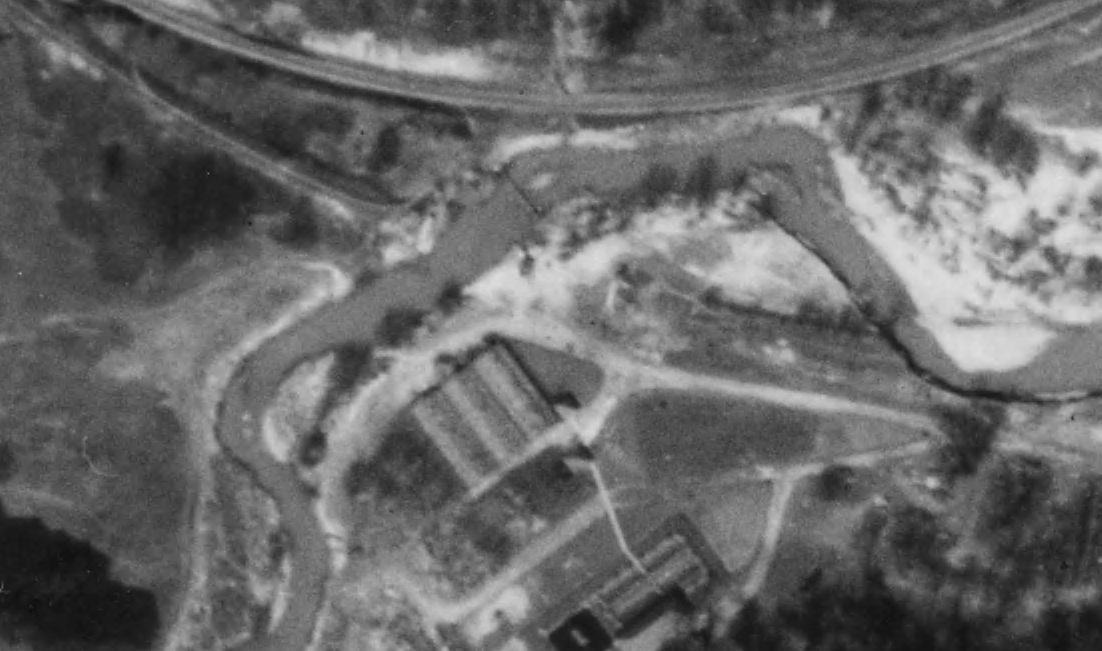 Here is the same location on Google, the image is a couple of years out of date: On Sunday, with warm temperatures and growth dying off, I was able to climb around the area of the hydro tower that appears near the center of the Google image above.  Directly adjacent to the hydro tower is this structure covered in weeds and vines: 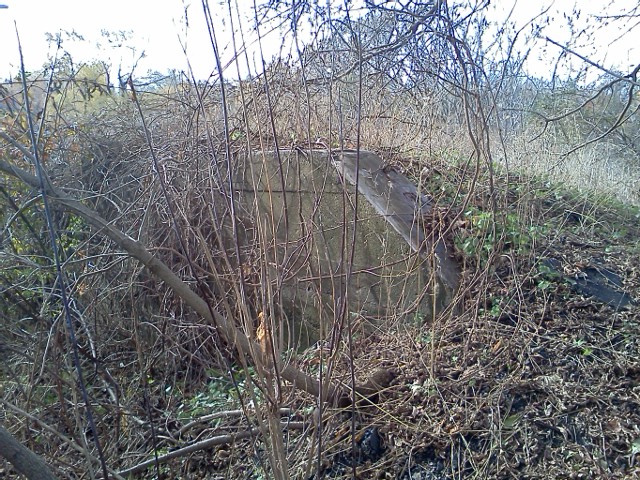 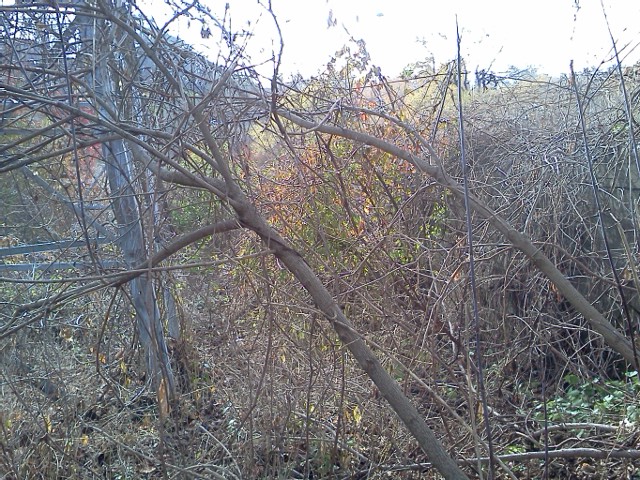 It sure looks like a bridge support to me.  In the 1942 image there's several industrial buildings just south of this spot but they don't appear to be where this structure lies.

On the opposite side of the river is the large angular whitish object that appears in the water in both the 1942 image and the Google image.  It's just a rocky outcropping that's accessible from a trail that runs on the north side of the river. 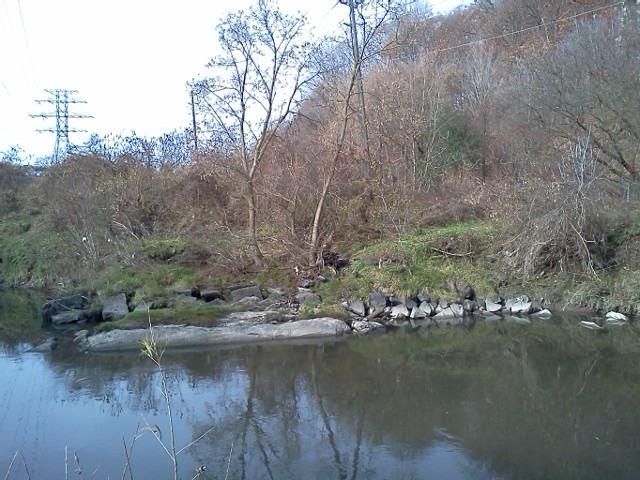 This is the same outcropping from the other side: 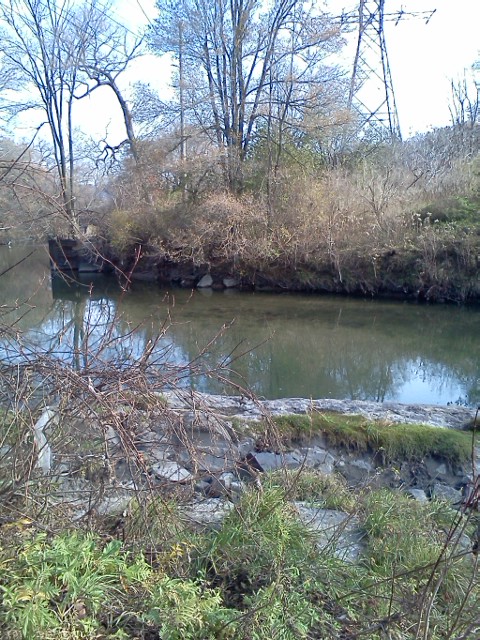 I poked around but could find no sign of any bridge structure.  The overgrowth is very heavy though: 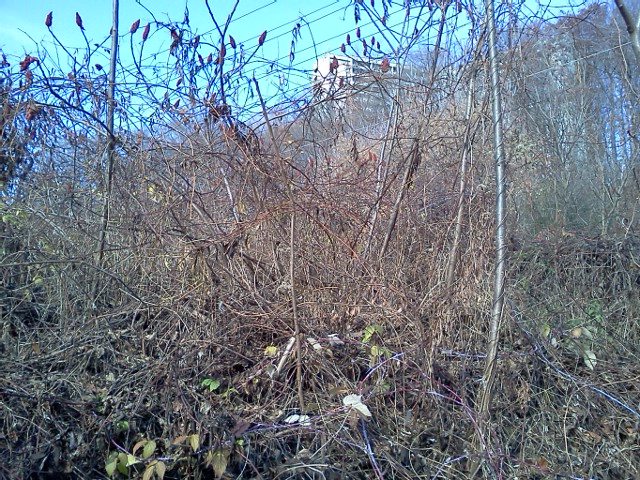 What is obvious on the other side is the raised railbed built up to level the tracks for merging: 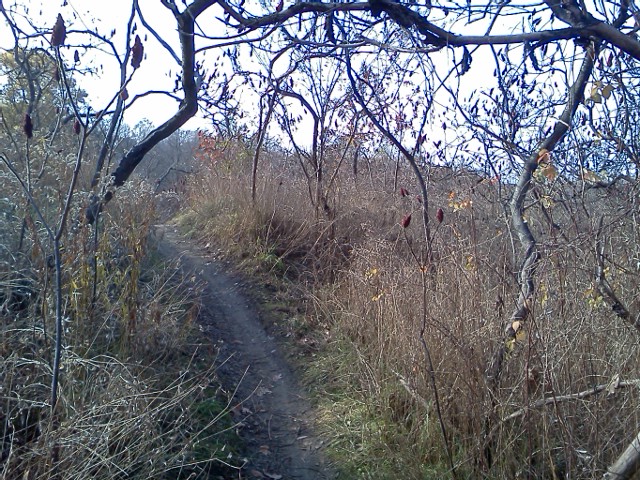 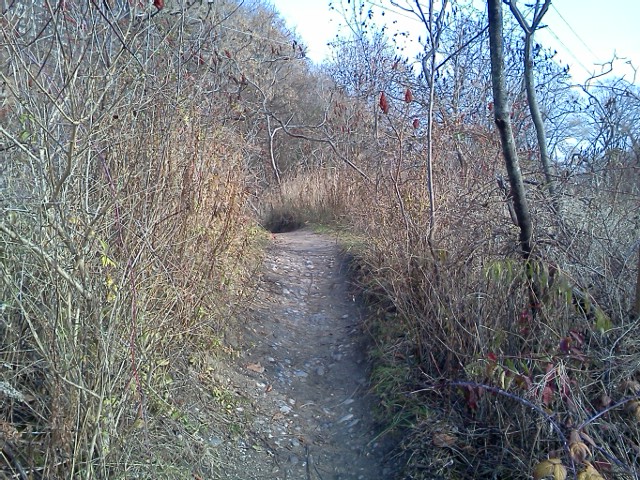 When you stand here, you can see the bed leading from where the bridge abutment would have been and it's path into the Bala tracks.

So, not much of this line remains beyond this bridge structure, the level graded areas in the valley, the raised railbed areas and the legacy of the utility poles east of Haldon Avenue.  It's still fascinating to think of a steamer chugging it's way delicately through Taylor Creek on it's way east, or back.
Posted by Jim Rodgers at 15:29 0 comments

I'm not a fan of running in the fog.  I suspect that inhaling all that particulate, especially here in the city, isn't a particularly healthy endeavour over the long term.  During heavy fog I stay in until it clears.  And, it's been foggy these days with warm daytime conditions, no wind and mornings at the freezing mark so I've had to skip morning runs.

Today was an exception, with fog limited to low laying areas like valleys, swamps and recessed rail corridors only.  And with the sky lightly illuminated to the south east it seemed a bit of fun to grab the Sony and jog down to the Danforth Subway station.

Lots of commuting action on weekday mornings here.  The trains start early and go straight through to nighttime.  Heavily run by GO and VIA, these trains move fast as well so keep your feet back of the yellow line when you're standing on the platform when a through unit passes because they do not slow down even a smidgen.

Here we start the morning with VIA tandem of 50 (Ottawa/Montreal) and 52 (Montreal direct) 10 minutes after it's 6:41 departure time from Union Station.  It will make a stop further down the line at Guildwood, but not here.  At the same time is an eastbound GO unit on it's way to Oshawa but lags a bit behind the VIA units.  I do wonder if these two trains drag it out on this section since they have identical departure times from Union Station.  Maybe I'll venture down to Union one morning just to see, good for a longer morning venture.

After departing Danforth the GO unit meets a sibling through unit making it's way to Union Station and no stop here, just a fast pass.  Watch the lights as they meet.

Glad I took along the video today.  I dropped off the car for service and hopped down into Crother's Woods, seeing it was a picture perfect sunny day for running some trail and maybe catch a unit going along Bala.

I was checking out an open area a bit north of Pottery Road, it's about 11 or so.  After grabbing a couple of shots of a bridge, I was in between open sections and could hear a horn blast further north, followed shortly by activating signals at a foot trail crossing.  I had to sprint back to an open area and luckily caught VIA Canadian #2 passing through.  Odd setup with 4 power units up front lead by 6442, 6410, 6456 and 6441 in that order.  Then the shorter winter consist of 10 cars.


After poking around the trails for a while, I wound my way back near the line and found the north signal showing red, and the south signal green.  Nothing had gone north so either something was heading southward or track maintenance was happening further up the line.

I got a call that my car was ready for pickup and headed back up the trails to the dealership.  Just before passing the waste treatment facility below the Redway Loblaws, a diesel sounds on the line.  This is about 12:30.  I'm a fair bit away but open the camera expecting a CN freight unit.

Surprise!  It's another VIA!  A more modern unit with light cars making it's way southbound.  Not what I was expecting at all.  I know of no other VIA units using Bala on a regular basis outside of the Canadian.  I was too far away to see any numbers.

So two interesting catches.  A 4 power unit short consist Canadian and a light modern Via unit.

Update:  Apparently there is some problems with a building near Union Station in danger of collapsing onto the tracks.  The Canadian was delayed and some other trains rerouted, notably VIA 84 out of Sarnia.  This is most likely #84 as the timing fits.